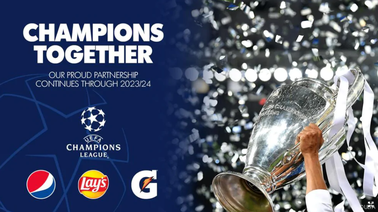 PepsiCo announced the extension of its partnership with the UEFA Champions League until 2024. The sequel follows PepsiCo's recent announcement of its multi-year partnership with UEFA women's football until 2025, now a unified and significant presence is presented throughout the prestigious football league.

You can expect more seasons of exciting activations with some of the most iconic brands that we represent (Pepsi® - which includes Pepsi MAX, Gatorade ™, Lipton® and 7UP®).